Dilalica are artists and curators who invite other artists to participate in original projects. The name Dilalica was generated by a computer program that randomly combined syllables frequently used in Spanish - a language that is written phonetically.

In 2019 Dilalica opened a gallery in Barcelona with an exhibition consisting of six works specially commissioned to Aleix Plademunt, Luz Broto and Lara Fluxá among others. The next exhibition, during Art Nou, was a single show by emerging Chilean artist Rocío Olivares. For BGW2019, "Digits and Atoms" explored the connections between digital information and physical matter with works by Lorna Mills and Shona Kitchen (also among others). Currently, "Cuerpo y Ficción" gathers works by Ariadna Guiteras, Lucía C. Pino y Cabello/Carceller. 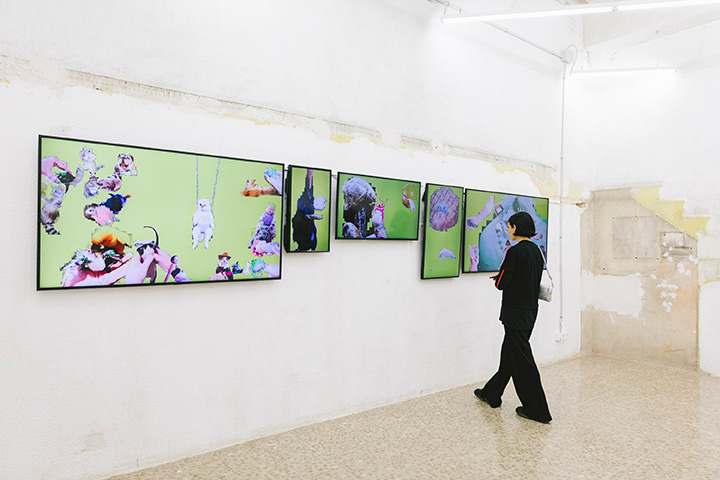 The Daltons is a collaborative project between artists Miguel Fructuoso, María Sánchez and Miguel Ángel Tornero. In this exhibition color blindness is the starting point to reflect around empathy, individualism and collectivity, and what is considered to be rare or common. The exhibition includes a series of formal and conceptual exercises in relation to color, suggesting that everything can be questioned, even the most universal conventions.

Bachelor of Fine Arts from the University of Salamanca, María Sánchez (Ávila, 1977) finished her studies at L ‘École de Beaux Arts de Bourdeaux (2000). For five years she worked under the direction of Javier Vallhonrat. In 2009 she received a grant from the Ministry of Culture at the Spanish Film Library for the cataloging project of the EOC Archive